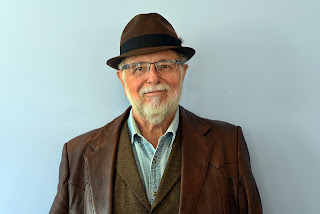 Larry Englund left us on Saturday February 2, 2019, at the age of 73, after lengthy treatments for stomach cancer. He is survived by Liz, his loving wife of 23 years. (For more information, check out Minnpost, StarTribune, and Pioneer Press articles celebrating Larry's life and legacy.)

Jon Bream of the Minneapolis Star Tribune called Larry "a bit of a character on the Twin Cities music scene." And that he was. A DJ, writer, and fan of music, as well. And a really nice guy, who put up with me not remembering his name for probably the first ten times I met him. He also wrote and published his own obituary, which I am now sharing below, as his website has succumbed to entropy, as all things digital eventually do. -- Al Iverson, May 2020

Well, it appears that I’ve died. Passed away, departed, checked out, left this earthly vale, kicked the bucket, left town… you get the idea. I went home, as it were on Saturday February 2nd, 2019, at the age of 73 after lengthy treatments for stomach cancer. I am survived by Liz, my loving wife of 23 years.

I was born and raised in the Bronx, the only son of Carl, a carpenter, and Edna, a housewife and excellent cook of comfort food. As a child, I was coddled by my three sisters. I have tried to live a life of kindness and understanding. Perhaps that is what led me to social work while in college.

Looking back, I realize that I’ve been an explorer of sorts, open to new experiences and adventures. My work life has been… varied. I stopped counting after 28 jobs, but can say I learned something from each job. Eventually, I got into tech writing and then marketing for hi-tech and medical companies. When I retired in 2007, I was working for Public Art Saint Paul.

My “Baby Book” (do they still have them?) tells of me loving my little turntable and golden records. My sister Lorraine turned me on to the music of Big Joe Turner and Fats Domino when I was about ten, and a few years later I became a teenage deejay, using one of those 45-only turntables for Friday Night dances at a church basement in the Bronx. I kept up my interest in music through college, and chose music for parties throughout my twenties and thirties. I started hosting shows on KFAI radio in 1981. Over 28 years I hosted three different shows and subbed for many others. I’ve been involved in producing a couple of outdoor festivals, as well as a show called Saint Paul Live! for KBEM and have served on the board of the Dakota Foundation for Jazz Education.

As a music writer, I interviewed folks like James Brown, Bobby Blue Bland, Nick Lowe, Bo Diddley, Allen Toussant, and Esperanza Spaulding, as well as numerous Twin Cities musicians. I started my blog, RhythmandGrooves.net, in 2010, and have written weekly on upcoming music events as well as featuring an occasional interview.

My adventures have included biking from Minneapolis to New Orleans; traveling with a band on tour in Peru, during which I spent a day at Machu Picchu and took part in a cleansing ceremony led by Incan shamans. I’ve visited pyramids in Mexico and Guatemala; hitchhiked cross-country a number of times; played tambourine and sang back-up in front of thousands of Luther Leaguers. Liz and I saw the “Wrapped Reichstag” in Berlin; visited the hamlet where my father lived in Finland; lived in the Netherlands for three years; visited Havana twice; built homes in Costa Rica; and, along with my wife Liz, were the only Americans on a bus traversing the Finland/Russia border.

Here are a few things I have learned, in no particular order:
That’s it. It’s been a good life. I’m leaving behind a loving wife, Liz, whom I adore, two sisters, Janet and Rene, and a passel of nieces, nephews, cousins, and many, many good-hearted, loving friends. Thanks to everyone for their support during these last few years. See you on the other side, wherever that may be.

A memorial / celebration service featuring some of the area bands that I have been so fond of will be held in March at the Hook and Ladder in Minneapolis.