The Artists' Quarter was pleased and flipped to host an AQ New Year’s Eve Reunion Party with Carole Martin and Friends on Thursday, December 31, 2015 at Hell's Kitchen in Minneapolis. 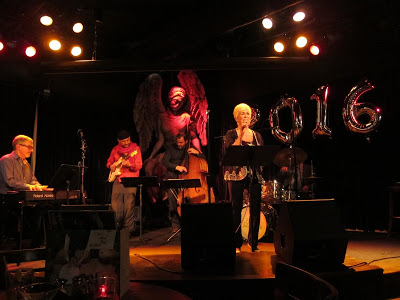 New Year's Eve with Carole Martin was the most popular Artists' Quarter tradition. Carole is the Twin Cities' preeminent torch song singer, packing an emotional punch with sublime stage stylings. Dean Magraw is more than a guitar virtuoso. His utter unity with the instrument creates a unique musical experience. Carole and Dean were backed by a killer rhythm section: Phil Aaron, Chris Bates and Kenny Horst.

The romance (both lost and found) and elegance that emanate from Carole’s vocal delivery makes New Year’s Eve all the more memorable.

And we were even listed as one of the top events for New Year's Eve 2015 in the Minneapolis Star Tribune!

Complimentary hors d'oeuvres (catered by Hell's Kitchen), champagne toast, party favors and a fantastic time were all included in the ticket price.

Thanks to everyone who made it out to our pop-up New Year's Eve event at Hell's Kitchen!
Newer Post Older Post Home